BEIJING, Dec. 5, 2021 /PRNewswire/ — Democracy is a shared human value, not the patented purview of a self-appointed few, the “International Forum on Democracy: The Shared Human Values” emphasized on Saturday.

In the keynote speech, Huang Kunming, a member of the Political Bureau of the Communist Party of China (CPC) Central Committee and head of the Publicity Department of the CPC Central Committee, shared four thoughts regarding the CPC’s propositions on democracy. 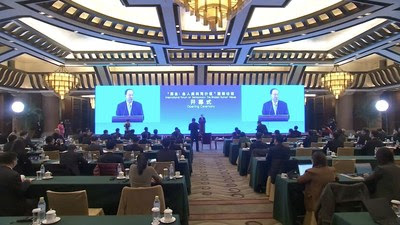 First, Huang asserted that democracy is a relentless commitment of the CPC and the Chinese people. The CPC has always been committed to pursuing the people’s happiness and the rejuvenation of the Chinese nation. It has conducted relentless exploration on the people’s status as masters of the country.

Second, Huang reiterated that the people’s status as masters of the country is the essence of popular democracy.

Democracy is not a decorative ornament, but rather an instrument for addressing the issues of concern to the people, Huang stated.

Third, the minister highlighted that China’s whole-process people’s democracy is a great creation of China’s democracy.

China’s socialist democracy is the broadest, most genuine, and most effective democracy that incorporates a combination of processes, including elections, consultations, decision-making, management and oversight.

Fourth, Huang said that whether a country is democratic or not, its people are those most suited to answer the question. It is inappropriate for one country to judge another country’s democratic practices.

Shen Haixiong, president of the China Media Group (CMG), echoed Huang’s words. He praised the efficiency and fairness of China’s democracy and declared that American democracy is “seriously sick.”

According to Shen, the U.S. imposing its democracy on other countries regardless of their cultural and historical differences has brought economic disruption and humanitarian disaster to the local populations.

Referring to CGTN’s exclusive coverage on Afghanistan, Shen pledged that the CMG will continue to shoulder its responsibility as a major international media organization to spread the truth and share democratic stories in China.

“We are going to work actively to push forward the construction of a healthy global public opinion environment, continue enhancing exchanges between different civilizations to contribute to building a community with a shared future for mankind,” Shen said.

COVID-19 vaccination in the WHO African Region – Monthly Bulletin, April 2022

The percentage of people fully vaccinated in the African Region increased from 13% at the end of March 2022 to 14.3% as of 30 April 2022. Six out of the 20 countries that had less than 10% of their population fully vaccinated in January 2022 have moved…